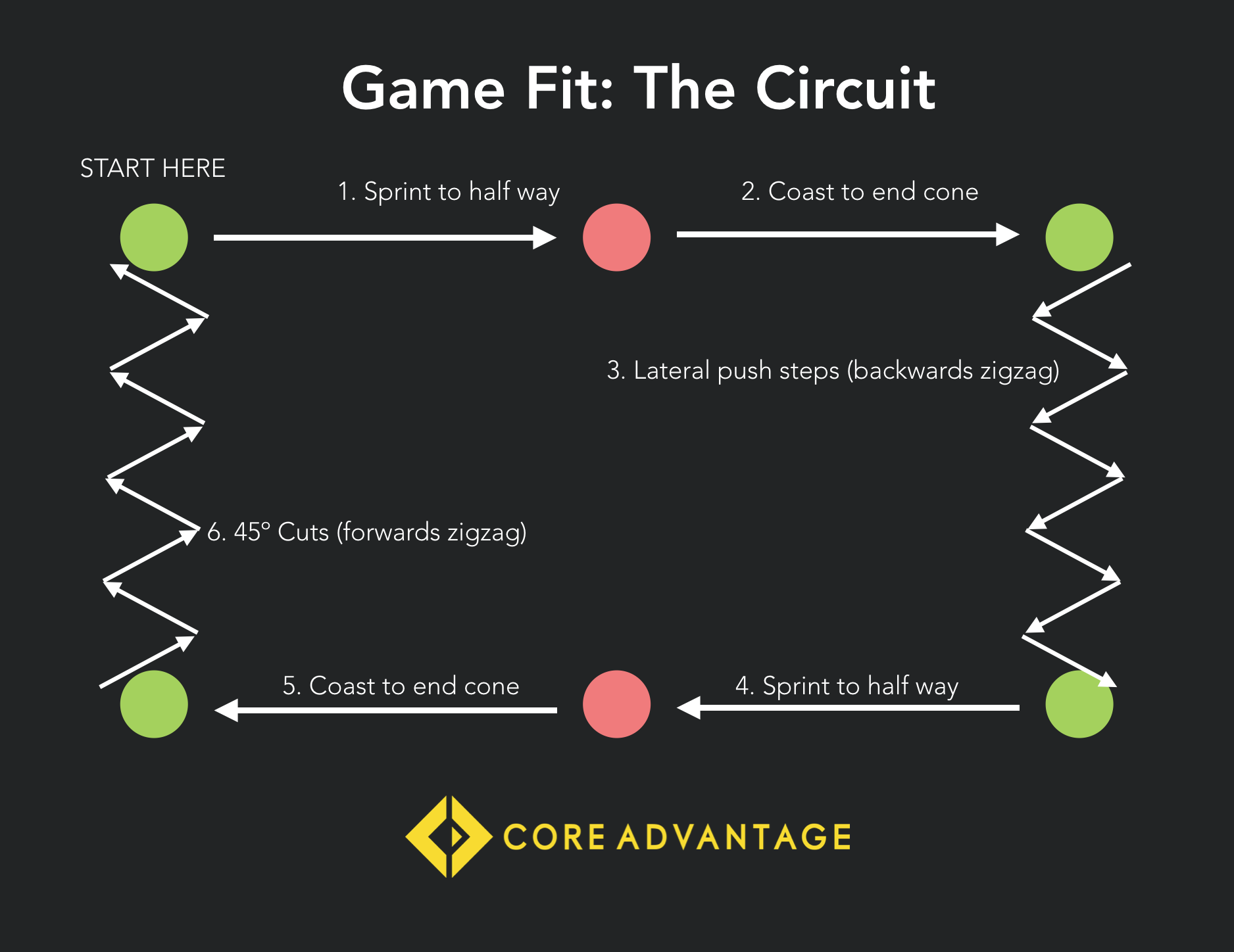 Sport specific fitness is something that's very unique and hard to replicate away from actually playing sport. Now depending on your sport and the position you play will vary as to whether this drill is purely specific to you but this simple drill is a great way to replicate the movement patterns and the intensity of most team and ball sports.

Start with some space...

Ideally, you'll do this work out on a basketball court with a level, even floor but over the holidays it can be hard to get access.

A soccer pitch, a football field, running track, anything like that will do the job. Just make sure it's even and check for any potholes before you start.
If you’re at an oval you are going to need to set up cones or markers. The sideline should be 25 to 30 meters long. While the baseline is 15 to 16 meters long. You'll also need to mark the halfway points of the sideline. (approximate distances are fine)

Then a full and thorough warm-up (scroll to the bottom of our website to download the PDF for free).

You'll also need some form of interval timer. given the multiple parts of the workout and the quarters we have built our own interval timer, which is available for free on both Apple and Android.

The workout has four quarters. Each consisting of;

*A ten-in-one is simply repeat sprints from baseline to baseline of a basketball or netball court often used as a penalty. The goal is to cover ten lengths of the court/field in one minute. If you don't have a court to use as a guide measuring out 25-30 metres on an oval will do the trick.

Now, this requires some explaining. The first 60 seconds of each quarter, you're going to do a ten-in-one. If you have a friend or a partner you can get them to time for you. If not, whatever you run over the 60 seconds for the full ten sprints. You'll just have to subtract that from your rest (if it takes you 70 seconds you now only have 50 seconds rest).

Now, depending on your age or fitness, 10 in one might be a little absurd. If that's the case, do a test-in-one effort and use that number. Whether it's seven, eight, nine, or even 10 in one, it doesn't really matter as long as by the end your pretty gassed and you're pushing hard the entire time.

After 60 seconds rest, now it's the time to do the actual game fit drill.

Start in the bottom corner and sprint to half court (1). At half court, switch off and coast to the end (2). Then you are going to zigzag your way backward with lateral push steps (3), two left then two right. At the corner, turn and sprint to the halfway cone (4). Coast to the end (5) and this time move across the baseline zigzagging forwards, two steps left, two steps right (6).

Now you're back to the first cone. Repeat as many as you can in the three minutes before taking the quarter time break and resting for 3 minutes.

The first time you do it, maybe just do one or two-quarters and build your way up gradually to a full four quarters.

And one last thing, if by the third and fourth quarters you're really starting to slow down in the quality of your movement because you''re starting to show it, rest more between each round of the game fit circuit. The goal isn't just to thread your way through it. It's to get high-quality explosives work for your muscles, your moving patterns, and your energy systems.