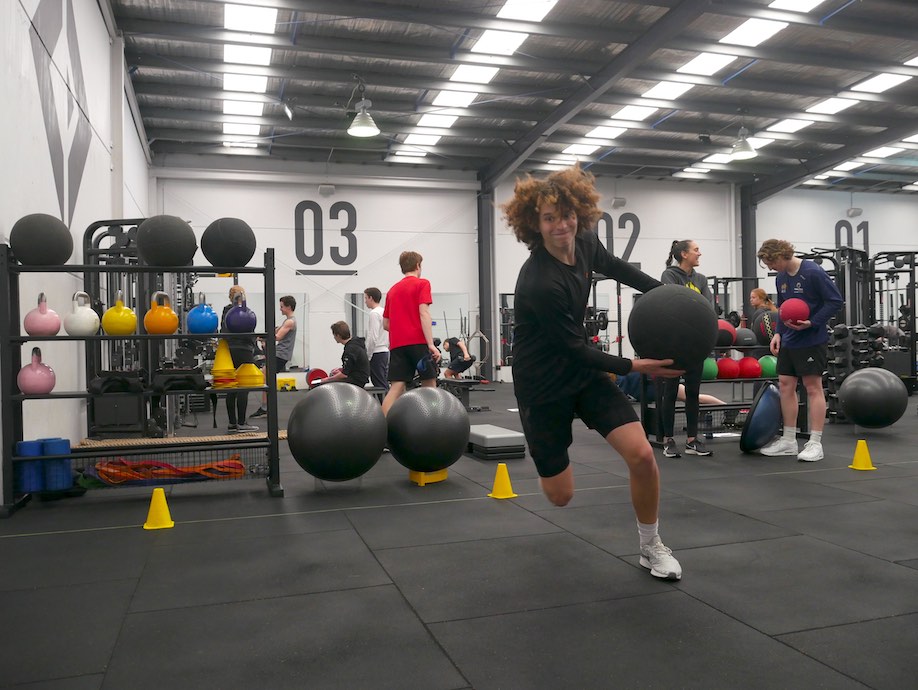 Medicine Balls, Wall Balls and Dead Balls, which one is right for me?

Every piece of equipment in the gym has that one use that it's just perfect for.

Take the trap bar as an example.

It's perfect use case is the Corelift (trapbar deadlift). One of the most versatile and effective ways to build low body strength and power in the posterior chain.

Some piece of equipment, like Power-bands, have a few really awesome uses. Accomodating resistance, pull-aparts, lateral push steps are just are couple of the best applications.

When it comes to balls, there's really three big reasons for using any ball over something else like a dumbbell or kettlebell.

Key benefits of training with medicine (and other) balls

1. Pure Acceleration & intent
When you throw, scoop, or slam the ball and you let go of it, there's no deceleration component to the exercise. That's going to help maximise power and speed development.

2. Full body power development
The second key benefit for using balls is they allow you the ability to use your entire body to create power, maximising the strength and power through every part of the kinetic chain.

3. Tri-planar training
The most important benefit when training with balls is they allow you to train in all three planes of motion. So much of what we do in the gym is forwards and backwards, up and down. Medicine balls, Wall Balls and Dead Balls they break that mould, allowing you to pivot, rotate and twist to create strength and power.

Creating power in 360º of motion is often the missing link between what we do in the gym and what we do on the sporting field.

But with so many different types of balls you can use for literally hundreds of different exercises, how do you know which ones right, and how to choose the best one for your use case?

In this article we will explore the unique benefits of Medicine Balls, Wall Balls and Dead Balls. All three have specific strengths, weaknesses and use cases. In today's video, we're going to explore those a little further and unpack why you might need the different ones for different specific scenarios.

Let's explore the benefits of the different types of balls.

Medicine balls look and feel like a basketball, just a bit heavier. They come in a range of colours and weights ranging from 3kg to 9kg.

You can use Med Balls as a weight substitution to modify the grip, use them to create an unstable surface but their best use case is used for doing throws for distance.

The Med Ball is nice for throws for distance compared to a Dead Ball because the weight sits more evenly through the ball. It's better than a Wall Ball as well because the smaller size means you can get your hands behind them easier and get more power into the ball.

Light Med Balls are also really good for doing continuous activation and rehab-type shoulder exercises. If you're going to do more full body power exercises, particularly continuous ones, you're better off using a wall ball as opposed to a medicine ball.

Wall Balls are probably the most versatile ball you'll find in the gym. They're also probably my favourite, especially these new ones from IronEdge with the aramid fibre surface, which is the same stuff you'd find in bulletproof vests, they're super grippy, really durable and have exactly the right amount of bounce.

The most distinctive feature of the Wall Ball is just how big they are, but they're actually really light. They start at eight pounds (3.6kg) and they max out at 20lbs (9.1kg) which is exactly what we want because the goal with a wall ball isn't how heavy the ball is but how fast you can throw them

There are endless types and variations of exercises you can use with Wall Balls and as the name suggests, most of them will involve a wall. Our three favourites and the ones we program the most are:

Continuous side to side slam

Using these three variations. You can do

But like everything you do in the gym, make sure you program them and progress them according to your athletes abilities. Use gradual progressions in complexity, load and velocity.

Be warned Wall Balls will bounce

If you are athletes that aren't that good at catching, or you're a little nervous about broken noses, the Wall Ball might be better substituted with the Dead Ball:

Dead Balls, or sometimes they call they are called Slam Balls have really one killer use. The slam.

The slam is a brilliant entry level ball-training exercise for a few reasons:

2. Controlling extension
You have to learn to control the extension overhead so you don't overarch. That's going to transfer nicely to any sport we spend time overhead or extending through your entire body.

3. Muscle mass recruitment
Slams recruit an enormous amount of muscle mass to accelerate the ball into the ground. Making them great for both power development (particularly good for swimming stroke or overhead throwing athletes), or if you do them continuously they make for a great metabolic exercise.

Applications of the deadball

The Ironedge dead balls is full of iron sand, which means they're not going to bounce back into your face. That makes it both safer and harder. As well as slams, Dead Balls can be used for rotational and wall-based exercises, but they're a little harder to use for shot put because the sand sits low and the ball making it hard to get a good single arm push into the ball. You're better off using a wall ball or a medicine ball for that.

They all have their separate use cases, strengths, and weaknesses.

How you plan on programming these for your athletes will determine which ball is going to be best for your specific context and situation.

We program a lot of throws and slams at Core Advantage so the IronEdge Premium Balls are our favourites. They look great, they feel good in your hands, and they are much more durable than other brands we have tried.

Check them out, see what you think and happy training