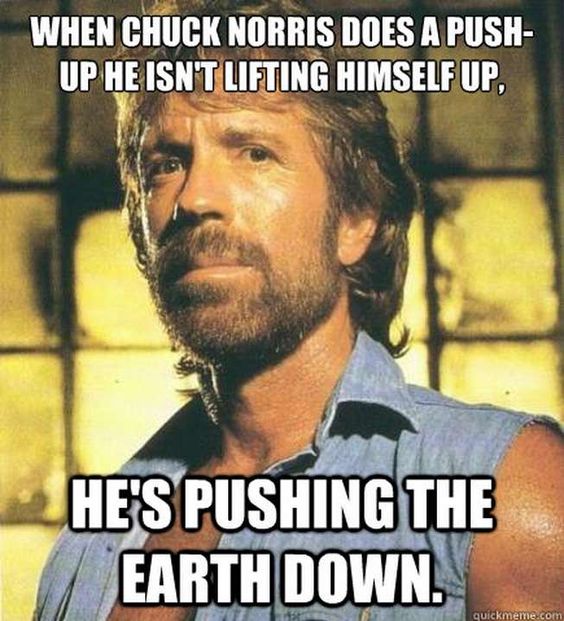 Instant Strength: Push the Ground Away

Back in high school, Chuck Norris was my hero. It wasn't just about the movies, I mostly just loved the quotes.

But definitely my favourite is:

When Chuck Norris does push-ups, he doesn't push himself up he pushes the world away.

Now it seems ridiculous that a human could alter the earth's orbit around the sun but when it comes to strength, speed and power development so much of what we do in the gym comes down to your intention and how the brain creates the signals.

The best way to coach or think when it comes to improving performance is to think about your effect on the environment. We call these external cues. To improve knee drive when sprinting thinking about breaking a pane of glass is a more effective cue than trying to activate the psoas on alternate legs. When you bench, you should think of trying to bend the bar apart, instead of trying to activate the lats.

But probably the most important and most effective cue in the entire gym is the Chuck Norris effect. Instead of thinking about lifting the weight up, think about pushing the earth or the ground away. It works in pretty much every exercise where your feet (or hands) are on the ground, But it's particularly effective on compound lower body movements like deadlifts, corelifts, squats, and the Olympic lifts.

How it works is it changes the neural activation and the muscle recruitment pathway turning movements from pulling back extension dominant patterns into pushing, leg triple extension, glute dominant exercises. When we play sport, acceleration, jumping, and lateral power are all about how much force you can put into the ground and how quickly you can do it, by grooving that neural pathway in the gym the transferability of our weights training increases dramatically, plus it will allow you to lift more in the long run because external cueing also makes you stronger.

So next time you're lifting something heavy think about pushing the ground away, driving your feet and particularly your heels into the earth.