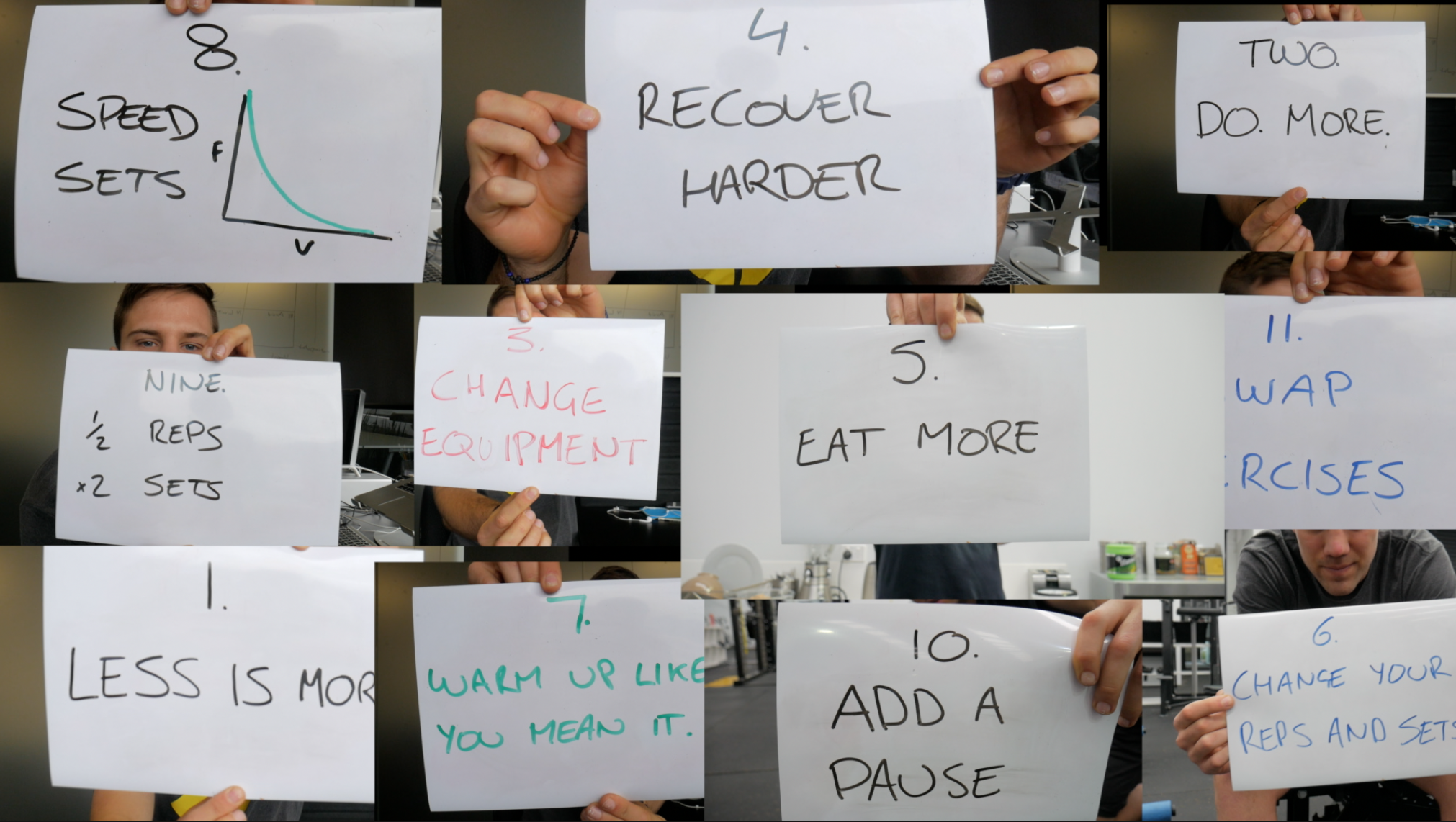 You start going to the gym, and rapidly get better. We call these newbie gains. Basically, your nervous system is being unlocked and taking off the handbrakes, allowing you access to more of the strength you already had (weak athletes often aren’t truely weak, their brains just aren’t confident to let them use all that strength so it puts a limiter on using that strength, they are also more prone to trigger points).

Then as you get stronger, progress level out until eventually, it grinds to a halt. This is a plateau. Now it's possible to live at a plateau or go up and down from one but today, let's talk about how you can break through a strength plateau to continue your progress.

This seems counter-intuitive, but if you're training hard and/or training frequently, your body never has the chance to supercompensate, adapt, and recover from the training stress. As a result you basically live in a constant state of just low level fatigue.

If you're currently training with high-intensity four, five or even six times a week, cut back to two or three sessions. Alternatively do less in each session, cut the reps, cut the sets and leave the gym with a little something left in the tank. Remember, the goal isn't to do as much work as is humanly possible in the gym, the goal is to create an adaptation to improve on the court, field or track.

Sometimes when you start seeing those PB’s (PR’s) roll in, and you start stacking more and more weight on the bar, it comes with the cost of reps. So sets of ten become eights, eights become fives, fives become threes, and all of a sudden, you're only ever doing singles hunting and hunting for more PBs and more weight.

Try this porque no los dos method when it comes to increasing your strength and keeping the volume in your program. Work your way up to a heavy three to four rep set so you get that nervous system load (something around 85-95%). But then drop back for two sets in a 65% to 75% range for some volume sets in a eight to twelve rep range. That way you train intensity and volume in the same workout.

Now, I wouldn't recommend this method if you already do a high volume of training either in the gym or for your sport, but for the rest of us, it's an awesome bang-for-your-buck way to get a lot of training qualities into the same workout.

Recovery can be passive, things like napping, playing X-box or watching Netflix, or it can be active. Doing low-intensity cardio, foam rolling, stretching or getting massage. All these help promote and accelerate your recovery both physically and mentally.

6. Change up Your Sets and Reps

If you're currently doing 3x10, maybe change it up and do some 4x6 work. If you're doing a 5x5 program, maybe do some higher rep work, or even take it lower and do a 3x3 program.
Or my personal favourite, try an ascending pyramid where you go up in load every set as you go down in reps. For chin-ups it may look something like this; Do a set of eight with assisted for a warmup, then do a set of body weight for six reps, then you do two sets of four at 10kg each.

Start warming up before you go heavy in the gym. That means a proper roll and stretch to loosen up those tight spots. Activation and band-based work for your glute max, glute med, your core and rotator cuff can really help wake up the local stabilisers, unlocking strength.

Start doing some speed sets, either for warmup or working sets. Train the entire force velocity curve to start shaking things up and to recruit your motor units in different ways. So much of what we do in the gym with the big lifts is strength dominated, dropping the loads adding in some velocity and working closer to peak power can have huge benefits.

Instead of doing 2x8 for your top working sets, swap it to 4x4. You're doing half the reps each set but you're doing double the sets. That means double the volume of sets, but because the reps are lower you should be able to ramp things up faster in terms of load and weight on the bar.

Add a little one second pause to the bottom of your exercises to take out the stretch shortening cycle, this will help with busting through sticking points with your lifts (especially good for bench press).

Switching up or changing exercises is a really good method to break through a plateau. But be careful though, too much variation and too much change can actually distract and become a problem when it comes to progressing along.

Keep three to four superstar A-grade exercises all year round. Things like squats, corelifts, chin-ups, and then you shuffle out through the B grades; things like single-leg work, core alternatives and upper body variations. Never add in the C grade exercises though, these are often more harm than good.

Try these (video) tips and tricks for improving strength as well:
Intent to Move
Push the Ground Away
Crush the Bar (Neural Overflow)