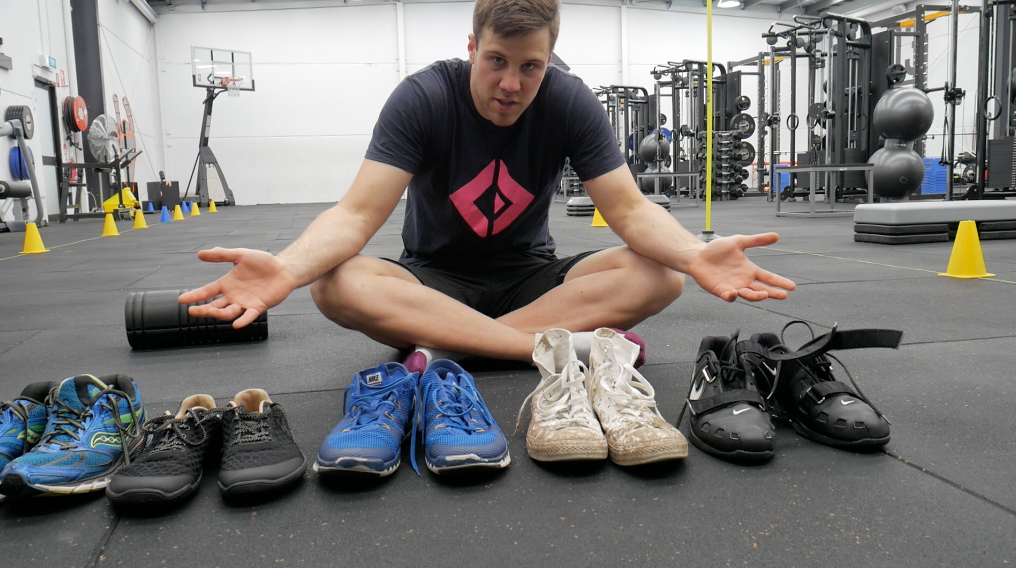 Shoes for lifting: what is the best Shoe for training in the gym

What shoes are best to lift in the gym in?

So far the shoe conversation has been centred primarily around straight line running, but what's the best option when it comes to lifting shoes?

These have two key benefits; The first is an elevated heel that artificially increases your dorsiflexion, allowing you to get into a deeper squat position. This does have the tendency to make you a little more quad-dominant with your squatting*.

The second benefit for the Olympic lifting shoe is the solid firm sole. When you try to lift something heavy or create power, having a soft, squishy cushion under your foot makes it really hard to generate that force.

*If your goal is weightlifting then that’s great, but for most team and ball sport athletes chasing extra knee flexion and the extra quad load is rarely the goal (these athletes tend to lack glutes, not quads).

Another great option to provide a firm base and remove the squishiness of a normal sneaker is something like a Converse Chuck Taylor or Van’s shake shoes. These guys as a bonus to being solid and stable are also pretty close to zero drop, so they’re a great option for deadlifting or just as a general all-round gym lifting shoe.

Another option in the zero drop category is a barefoot or a minimalist shoe, something like the Vivo barefoot. Just like a Chuck Taylor and the Olympic lifting shoe a minimalist shoe doesn't have foam or cushioning to squish around on your foot. Most of them also have super thin sole, which allows you to feel and grip the ground allowing the intrinsic muscles of your foot to go to work. The other benefit is the wide toe box allows your toes to spread, increasing stability and control.
Because Vivo’s are so lightweight and flexible, they won’t get in the way of natural or unusual movements like crawling and Turkish Get-Ups either.

Vivo’s are not the only option, however, there are heaps of brands that do a minimalist shoe with a wide toe box (we just happen to like them the best).

One brand that's not currently technically doing a barefoot shoe, but probably will very soon is Nike. In the Nike free range, they have a 1.0 (1.0 is a measure of heel to toe gradient, we wrote about that here) in women’s at the moment but it still has a pretty narrow toe box. In the men’s range, the lowest you can get is a 3.0 (about 4-6mm of heel to toe drop)*.

In saying all that Nike Free’s are still a pretty good gym shoe, they have a flat sole, there’s not a huge amount of cushioning so it’s not going to squish heaps under your foot (compared to other sneakers), and they’re super lightweight so they’re pretty comfy without being overly controlling or pillow-like under the foot.

A Nike Free or something similar is also a great versatile option if you're combining your lifting with what we call track time; agility, jumping (plyometrics), or sprinting work as part of your workout (Reebok Crossfit sneakers are actually great in this department as well, as are the Nike MetCon for more structure than the free).

*If you have motion control, or any foot based injuries/problems at the moment, switching to barefoot or taking out your orthotics like I’ve said before is probably not a smart idea right now.

The last shoe I want to discuss today is a traditional running shoe. For the majority of gym-goers, this shoe is okay, but it’s far from perfect.
If you’re lifting light to intermediate type weights (below 1x bodyweight on the squat, deadlift or corelift as a rough guideline) you’re really not going to notice the difference no matter what shoe you lift, but as you start to lifting more, any squishiness under the foot is going to interfere with your ability to produce force.

The other effect of a cushioned bulky shoe is it blocks your proprioception and ability to feel the environment so you won’t be able to grip the ground or get any sensory feedback from the feet.

So what's the best shoe to train in?

For your track time, plyometric, sprint, and agility work first place goes to the shoe you play your sport in. It’s got a solid controlling upper, a good heel lock, and it’s what you’re going to play in so you want to replicate that and be comfortable in your playing shoes (just don’t go doing sprints on synthetic grass or rubber in footy boots!).
Second place goes to something like a Nike Free, tied with a minimalist shoe (only if you’re making that transition) or even the structured running shoe.

For your strength training, if you’re going to Olympic lift or front squat, I’d probably you use an Olympic lifting shoe (always be sure to ask the question; is a knee dominant squat what you need to be doing? We are much more in favour of a glutey squat that de-loads the knees). It’s going to provide the extra range of motion so you can get into a deep position easier (if that is your goal).

For all the other heavy lifting I think first place goes to the minimalist shoe because you’ve got a wide toe box, not much cushioning under the feet and you’re flat from heel to toe so you can feel and sense the ground. The second place I would say goes to the Chuck Taylor or the Van, and then third to something that's not overly cushioned, and reasonably lightweight (like the Nike Free range or similar).